We have many wonderful cats and kittens that need forever homes. Some of our cats have special needs, and many do not.
Please check our Petfinder link for a list of these magical babies ready to bless your home and life.

If you'd like to meet our adoptable cats at one of our adoption events, please check our events page for more information.​
​
To adopt a Milo's cat, click here to complete our adoption application and return it to adoptions@milossanctuary.org

Asher came to us from a high kill shelter after he was brought in as a "stray" with a small benign growth on his face. He was put on the euthanasia list but we saw his beautiful eyes and knew we had to help.

He had the small growth removed and he's perfect and so regal. He's a maine coon mix and on the bigger side. But he gets along great with other cats and loves humans too!

Whoever is lucky enough to adopt this beautiful regal and gentle boy is going to be so very lucky! 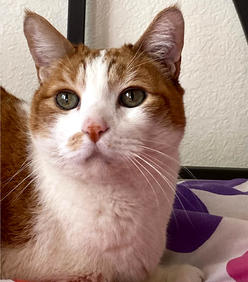 Hank was dumped by his humans because he had diarrhea once outside the litter box! At the shelter, Hank was kept in the back in the medical area, so no one had chance to see his handsome face. Hank was declared in good health by our vets and has never had an accident with us. He is up for adoption and needs an adult-only home that understands his shy nature. We suspect he has some trust issues and trauma from being surrendered to the shelter, and it will take a special person to bring him out of his shell. Could that be you?

Hank will stay with the Sanctuary until a special person comes along to welcome Hank into their lives. ​