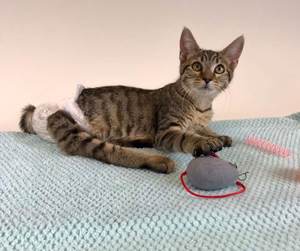 Whirly was found in the backyard of a kind woman in San Diego. She rescued and bottle fed him from the time he was 4 days old. As he grew, she realized that there was something wrong with his back legs and that he did not have the ability to walk. She never gave up on him, and when he was old enough, she took him a veterinarian who took x-rays and did tests  discovered that Whirly was born paralyzed. We aren’t sure exactly why as none of the tests were conclusive, but his back legs simply do not function.

As he grew, she realized that he needed more care than she could give him and that her two dogs where too cat aggressive to be around little Whirly. Even though it was hard on her heart, she knew she needed to find a place that could care for Whirly in the way she couldn’t, and she reached out to Milo’s Sanctuary. One look at that face and we were smitten.

Whirly doesn’t let anything stop him. He is incontinent as well as being paralyzed, but he doesn’t mind diaper changes (that much) and loves to scoot around as fast as he can and play with the other cats and kittens. He’s learning to use a cart and so far, he’s a speed demon in it; crashing into everyone and everything playing what we call “bumper cats”! He loves toys, affection, and doesn’t realize he’s different in any way from a cat that can walk.

Whirly does need to be on a special diet as he’s prone to constipation issues and bladder infections, and so far, he’s doing great on his special food and homeopathic medications we put in his food to keep him healthy and happy.
​
More than anything, Whirly would love you to sponsor him so that he can always be kept in diapers, toys, special food, and anything else he requires! He promises if you sponsor him, he will be happy to show you how fast he is in his wheelcart! 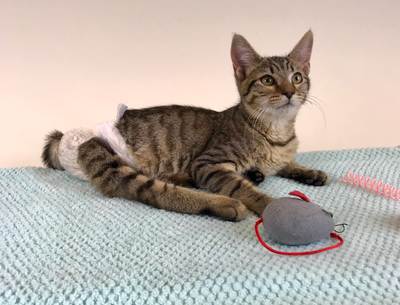 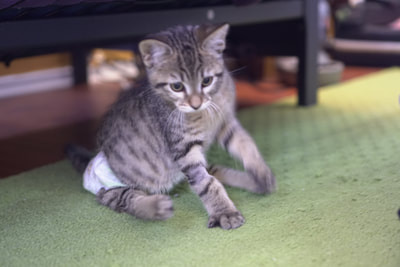 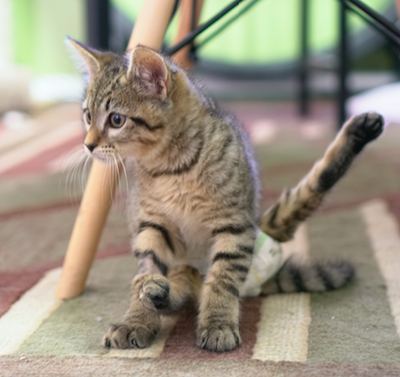