Years ago, a brave lion wandered the kingdom in search of a home. No one knows where he came from, only that he journeyed alone through a vast desert, always searching for a place to call home.

One day, the lion was attacked by evil monsters. They came upon the lion in the hot desert, attacking him with acid that burned away his fur, his skin, and one of his eyes. The monsters left the lion to die alone in the desert, unknown and unloved. Luck was with the brave lion, and a kind soul discovered the lion and brought him to safety in her village. The lion was grievously wounded, so the kind soul sought help from the village healers. “Be brave”, she told him, as she turned his fate over to the healers.

The healers worked their magic on the brave lion. Though he was hurting, he knew that kind people were helping him, and felt safe for the first time. As he healed, he was told of a magical place not far from the village. A sanctuary for those without a home, a place of refuge for those wounded in the wide world. Milo’s Sanctuary, he knew, was where he would journey to find his true home.

The brave lion left the village and the kind healers who’d restored him to health to journey to Milo’s Sanctuary. He was welcomed to the sanctuary and hailed for his bravery for all he had endured. He was welcomed by others who shared tales of their journeys in the world, of how they too came to Milo’s to find sanctuary, and of the love and kindness they’ve experienced within its walls. “What’s your name?” they asked. “Tommy”, he answered. “We shall call you Thomas Trueheart, for through all you have suffered, your bravery and goodness remain, and your true spirit has guided you to us”.

So it was that Tommy the lost lion braved the wild, escaped pain and death at the hands of monsters, and traveled to his home at Milo’s Sanctuary. In his time at the sanctuary, Tommy became a voice for the voiceless, a beacon of hope for all those like him who cannot speak out against the hurt and the pain, and an inspiration to all who knew him. He became Sir Thomas, the bravest of all, the gentle lion, and the truest friend.

Elsewhere in the kingdom, a powerful yet gentle wizard was on a quest of his own. He traveled far and wide, seeking a place where he could use his powers to help and heal others. The wizard used purrs of peace, snuggles of solace, and cuddles of courage to heal those he met along the way.

As the wizard traveled the land, he too was set upon by the forces of darkness. A band of monsters attacked the wizard, wounding his face, eyes, and ears. He stumbled to a village, seeking aid from those he met. A kind woman helped the wizard, and told him of Milo’s Sanctuary. “A mighty and noble lion lives there, bringing peace and hope to all he meets” said the woman. “Your powers could be of great benefit to those who dwell at Milo’s Sanctuary”. So the wizard journeyed to Milo’s Sanctuary, and there he met the gentle lion. “I am Sir Thomas”, said the lion “I welcome you to our family. May you find peace and sanctuary here with us”.

The wizard became known simply as Wizard. He and the lion were fast friends, and many said they looked like brothers. The Wizard and the Lion spent many happy days together, baking in the sun, sharing wonderful meals, and visiting with those in the Sanctuary. Their friendship was an inspiration to all who met them, and their stories of courage and message of peace brought comfort and joy to many.

They two were friends until the end of their days. Sir Thomas was the first to cross over the rainbow bridge. The kingdom mourned his passing, and too soon afterward, Wizard joined him. Everyone at Milo’s Sanctuary honors them and continues to help others in their memory. 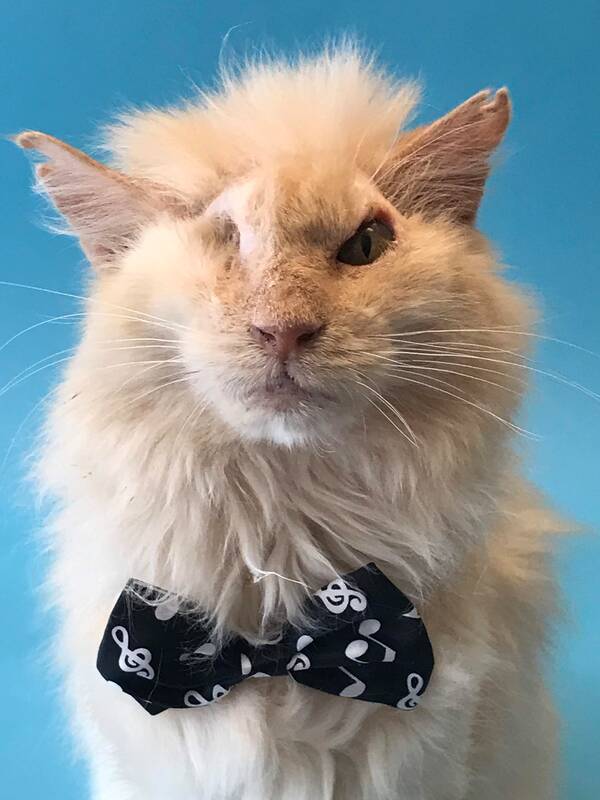 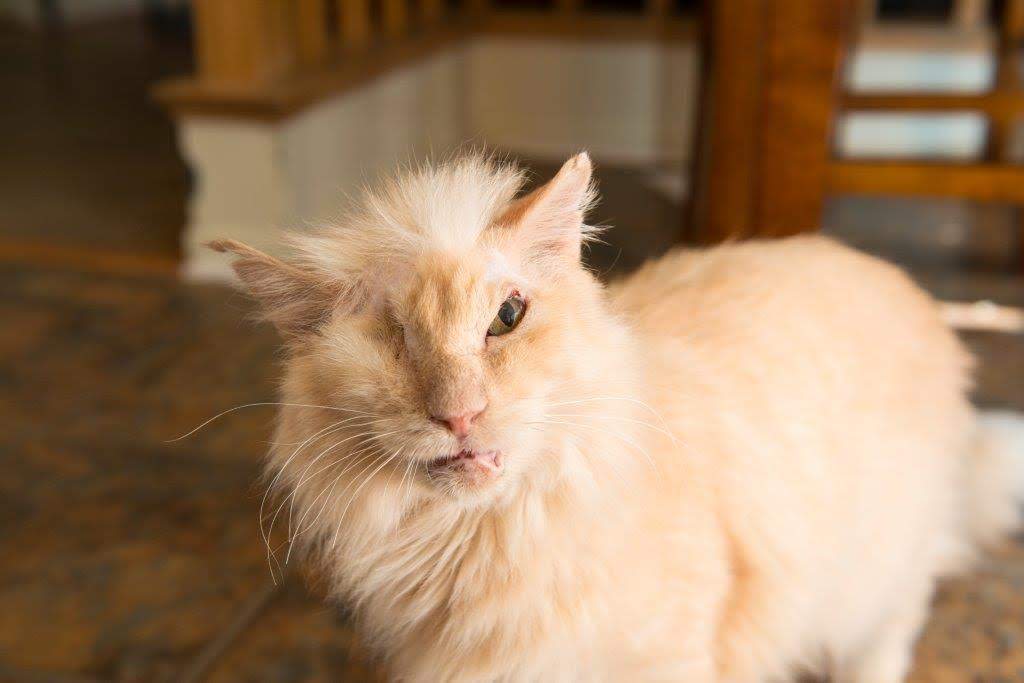 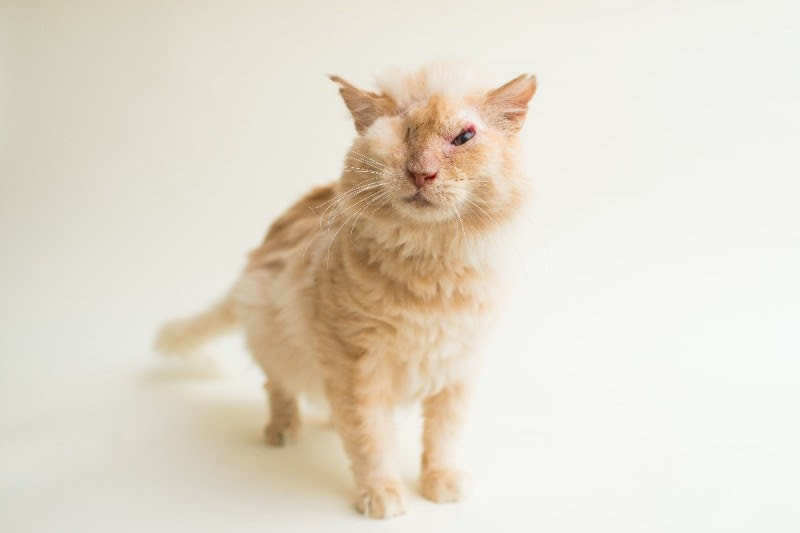 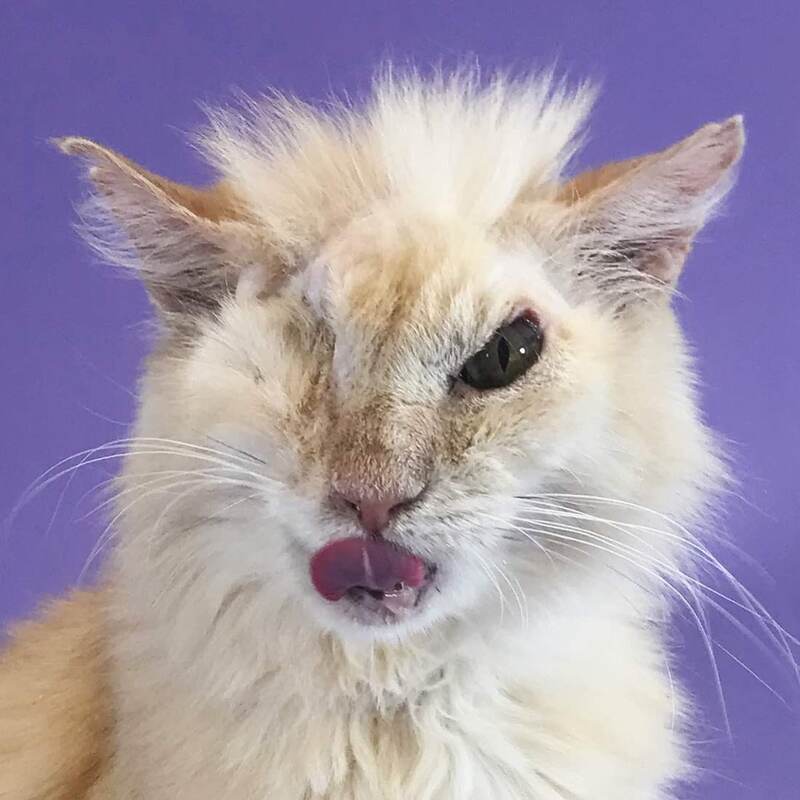 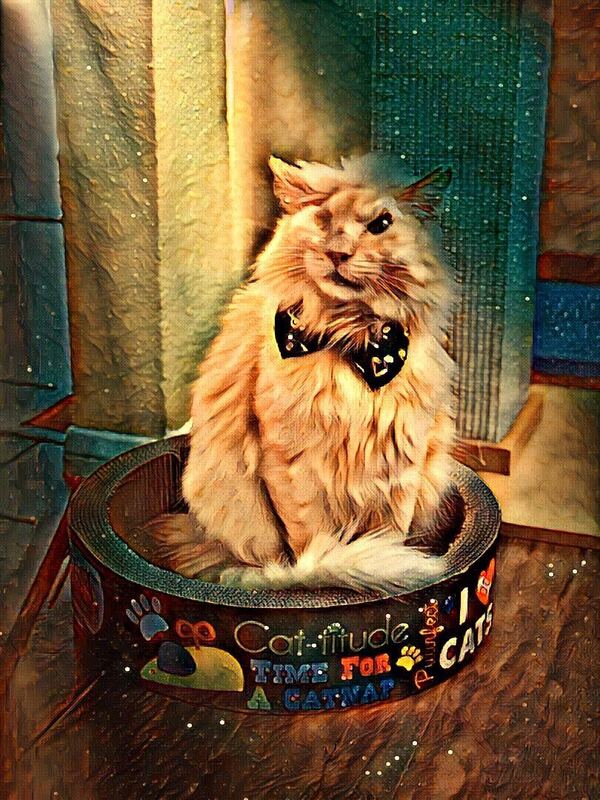 Sir Thomas Trueheart was rescued from California's high desert after humans poured a caustic substance on him, melting his face and destroying one of his eyes. He was rescued by Milo's Sanctuary, received life-saving surgical care, and was found to be FIV+ during his recovery from his injuries.

Tommy was awards CatCon's Biggest Newcomer award in 2018 and traveled to many focused events  to meet his fans and spread his message of kindness towards animals and care for special needs cats. Tommy crossed the rainbow bridge in November, 2019.

Tommy's story was featured on several websites during his time with us at Milo's Sanctuary.  Read more about Tommy here and follow Tommy's legacy on his Instagram 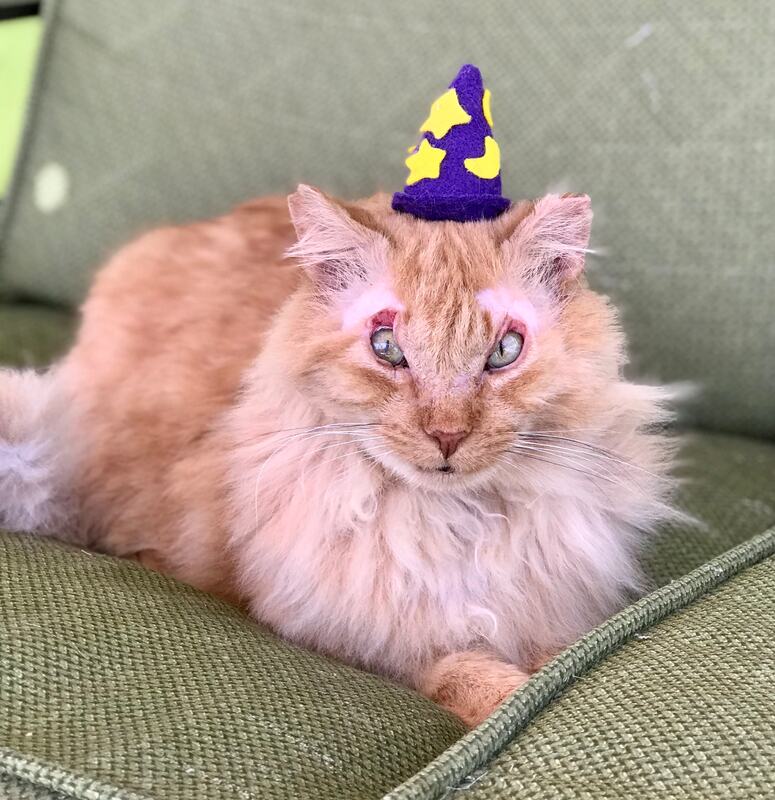 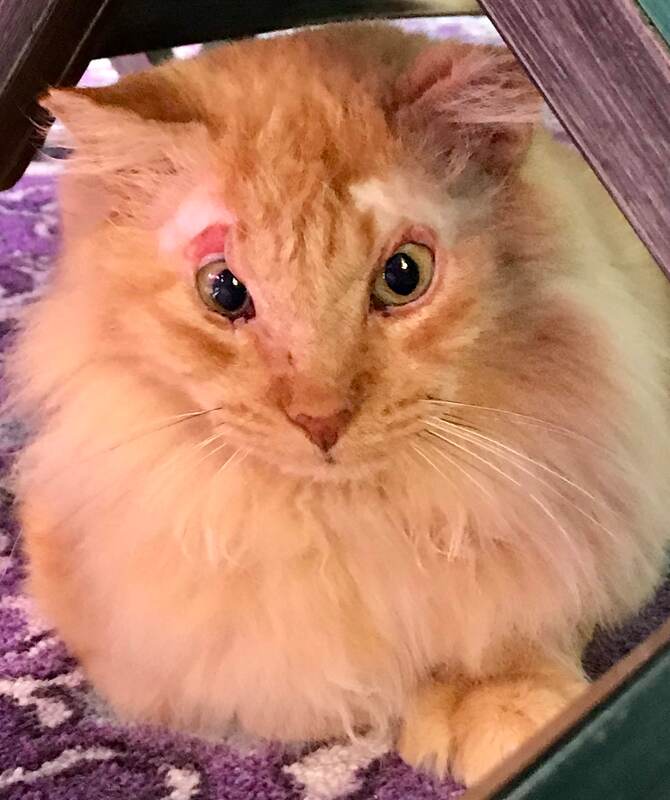 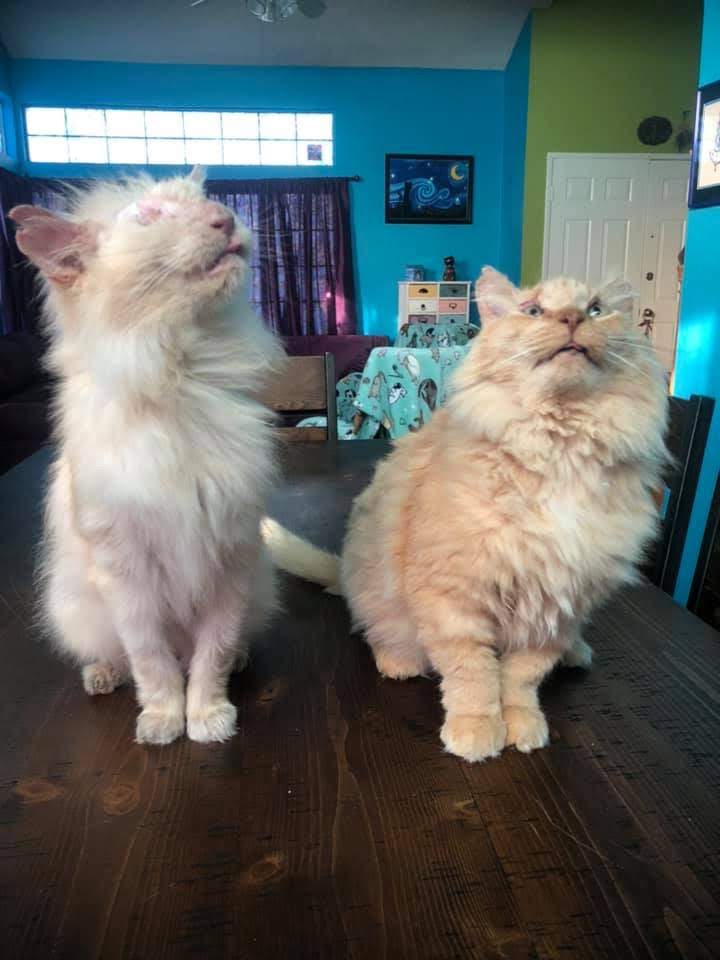 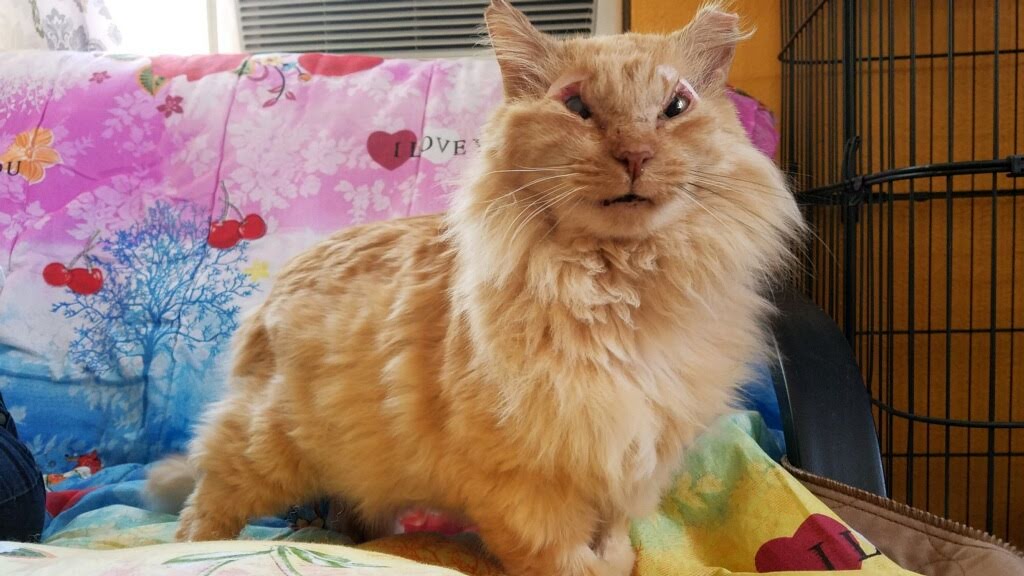 Wizard was found in South Carolina by two kind women who noticed an injured cat in their neighborhood. As they helped him heal, they realized his medical issues were more than they could handle, and reached out to Milo's Sanctuary. Seeing another cat that looked so much like our Sir Thomas, we agreed to transport Wizard to Milo's. Like Tommy, Wizard was injured, FIV+, and intentionally harmed by humans. Wizard was a sweet, trusting, and loving cat, and a friend to all who knew him. Wizard crossed the rainbow bridge in February, 2020.